How AR, VR, & The Metaverse Can Elevate Your Event

Event marketers are eager to use new technology to help heighten experiences for hybrid audiences. The big buzzwords in this arena are AR, VR and the Metaverse. But are these technologies passing fads or worth investing time and money into? Even if they are here to stay, can they really work for events?

There are no simple ‘yes’ or ‘no’ answers to these questions. But technology is interesting enough—and has enough event potential—to warrant a closer look.

Here’s a quick breakdown of their unique capabilities and few thoughts on they can be used strategically to enrich your event.

Augmented Reality (AR) brings a digital element to a live environment. Often using a camera on a smartphone, the virtual environment is designed to coexist with the real world.  This is one of the easiest forms of technology to utilize for events, because there are so many ways participants can bring AR into their environment, whether they’re in-person or attending virtually.

Coachella used AR for its livestream of Flume’s 2022 concert, the first time the technology has been implemented into a music festival performance. For viewers at home, a huge bird appeared behind the stage while psychedelic images bled into the screens below. It was all made possible by Epic Games’ 3D software development tool, Unreal Engine, and though the tech was a first for Coachella, it’s certainly not the first time it’s been used in broadcast. The Carolina Panthers used it to bring their mascot, Sir Purr, to life. A virtual version of the cat was seen leaping into the stadium, pacing around the field, shredding their opponent’s flag and pouncing away with a loud roar. As both are live feeds of the real world, camera operators track the animations in real time as they move to incorporate them into the view they’re looking at. Together, their videos have logged millions of views which only supports AR’s capability to captivate a broad audience. Fun fact: Cramer can help clients incorporate similar experiences. Let our Senior Director Elise show you how.

While AR is about injecting virtual elements into the real world, Virtual Reality (VR) is about putting yourself into a digital landscape. Requiring a device such as a headset, VR is a completely immersive journey into an enhanced fictional reality. While they can seem endless, these worlds are built by a designer and can be set up in a way that allows you direct the attendees experience. Think of it like a video game; users log in, play, leave, and then come back exactly where they left off. It lets attendees craft their own unique experience, while still allowing brands to have ownership of content. 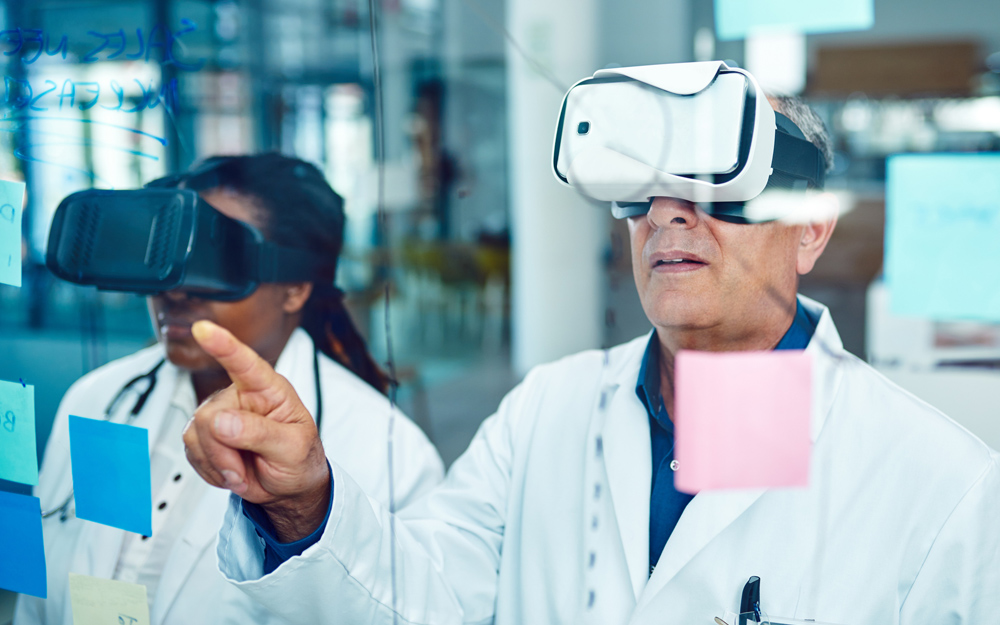 VR has proven to have a lot of practical use in multiple industries. While it presents itself as a game, Cities: VR lets users hone their real-life city planning skills. Companies use virtual escape rooms as team building exercises for staff that are spread out over the country and some like Room of Realities are even building out multiple rooms that lead to a connected storyline overall. The healthcare space has uncovered numerous benefits with VR, from helping with pain management to addressing mental health needs. Limbic Life has even used it in Project VITALICS to virtually assist in rehabilitative use of their hands and legs. VR makes learning a hands-on and accessible option in a practically limitless way.

As the metaverse is still in its early phases so its capabilities are still being explored. What we do know is that it combines virtual reality and augmented reality to provide an engaging, human experience. It doesn’t require a headset (though users can incorporate it) and can be used by any internet connected device. Users create an avatar that navigates the virtual world for them; a world shared by other users. Unlike VR, which is more of a controlled experience, the Metaverse is an open landscape.  As avatars move about the world, there is constant opportunity to engage with others or alter content around you. And like a real-world party, the Metaverse doesn’t stop when you leave. Users can come and go as they please, but the Metaverse continues… so those who suffer from FOMO may want to prepare themselves for the eventual pang of jealousy they may feel logging out. One of the most successful examples of a metaverse-type event was Travis Scott’s performance in Fortnite. Over 12 million users participated by having their avatars congregate and literally followed the artist throughout the virtual landscape while Scott’s skyscraper-sized avatar continually transformed during his 10-minute set. While this technically was not performed within the metaverse, it is precisely the sort of event that would match it as users could participate from any device in a shared digital platform and the scope of reachability was undeniable. Just imagine what amount of viewership an even larger platform would escalate to.

While these 3 emerging technologies are currently driving a lot of conversation in production circles, the key takeaway is to be purposeful about how they’re used. Like the quote, “Art without meaning is just decoration”, VR, AR and the Metaverse without strategy are just feeding into a fad.

What gives new technology longevity is the ability to be useful, accessible, and user-friendly. If you are looking to uniquely showcase new features, share visuals in an immersive way or quite literally give your audience a chance to come into your world, these systems are incredibly powerful. You want your audiences to come away from an event excited to see what your company has in store for the future. Harnessing new software may just be the way to show you are leading the way into a brand-new landscape and looking ahead to what is becoming possible.